With tablets becoming more popular in the office one primary use is having them in  meetings and being able to access handouts as well as taking notes. The following are some recommended meeting note applications for tablet users; 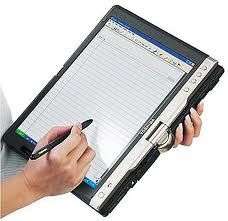 Noteability. Notability  integrates handwriting, PDF annotation, typing, recording, and organizing so you can take notes electronically on the tablet.

Evernote. This is a more robust app that not only takes meeting notes but is like a personal Google organizer for users information.

Penultimate. A leading handwriting app for iPad, purchased by Evernote in 2012. It can email images and files in PDF format and works with Evernote and Dropox.

NotePad Pro. This app has the ability to record audio while typing or drawing. It will save notes as  PDF that can be emailed with audio files.