Evernote has been the dominant app for meeting and note-taking. It has a streamlined interface and interacts with other programs such as Microsoft Outlook. There are competitors to Evernote recognizing that everyone needs a place to track meeting notes, tasks, ideas, recommendations and other pieces of information. Below are some other recommended applications for note-taking.

Google Keep is a simple platform to 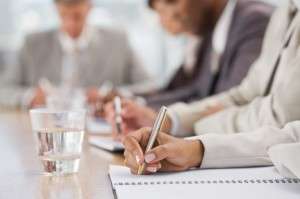 take notes. Google Keep integrates with a user’s Google platform and notes can sync with Google Drive. Users can make unlimited lists, add photos and graphics to notes and also color code notes. Although the functionality for Google Keep is fairly basic, knowing Google it probably will get enhancements in the coming year.

Microsoft OneNote is part of the Microsoft Office suite and an alternative to Evernote. OneNote was specifically designed as a meeting note application and does a great job of organizing meeting notes by type and date of meeting. The integration with Outlook is also a key feature as it allows users to import emails and tasks between the applications. OneNote has an app and notes can sync to mobile devices. However, attached files such as Word, Excel or email documents may not open depending on your platform. The free version of OneNote is limited to 500 notes, with unlimited use available for $4.99 via an in-app purchase.